We accumulated numerous things from my parents’ home before it was sold late last year.  It had been the family home for over 50 years so there was a lot of stuff to distribute.  This had been an ongoing project for my mother since my father’s death almost 10 years ago.  The pace cranked up a notch in the latter part of last year as the impending sale loomed large.  Downsizing to a 1 bedroom unit meant that my mother would only keep a relatively small quantity of her personal possessions and mostly replace the furniture as things like a large family dining suite were simply not appropriate for your new circumstances.  Hiring a skip and dumping everything was never an option as my parents, who were both young children during the Great Depression of the 1930’s had taken great care of their possessions and my mother wanted to ensure that as much as possible went to ‘good homes’.

We used many methods such as garage sales, Freecycle, Weekend Shopper, talking to friends who might need particular items and of course, the family.  One of the many things we brought home was a small shelf which my father had made.  I felt that it would be useful – somewhere, sometime………..  Sure enough, while we were tidying up the workshop a couple of weeks ago we decided to mount it on the wall as it was a perfect spot for the old CD/radio that The Duke  keeps in the workshop for his entertainment.  It is only a minor issue in the scheme of things but all of those little bits add up.  Here it is. 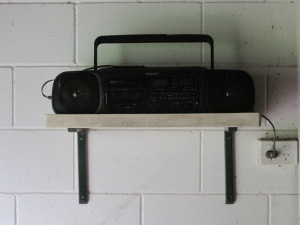 2 thoughts on “A Perfect Fit”