It is one thing to instigate changes yourself but the ones that are forced upon you (for a wide variety of reasons) can be another thing entirely. 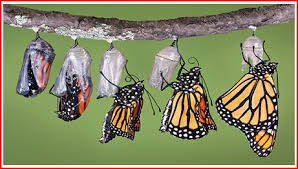 But hang in there because the end result may be beautiful.

This morning we headed off to catch the train as we do each weekday morning.  It seemed that the train was a few minutes late but we did not give it too much thought until several stations down the line.  It became apparent that this train was going to stop at several stations that are normally bypassed by this express service.

Then it dawned on us that today was the first day of the new timetable due to the opening of a new branch line.  I then studied the timetable online and discovered several changes which will have a slight but noticeable impact on our morning and evening travel routine.

It is easy to slip into a routine that works for you but invariably there are outside forces at work to almost constantly disrupt things.

Both GMan and I are in the process of moving at work.  GMan’s entire office is moving a couple of kilometres away to an entirely new building while my department is simply moving to a different floor in our building.  All of this brings challenges and one of them can be the reaction of those around you.  Negativity and anxiousness can easily be transmitted within a group.

I try hard to be as flexible as possible and make a conscious effort not to be upset by things which are beyond control.

How about you?  Hope do you stay afloat when you seem to be surrounded by changes?