Although we grow a range of fruit and vegetables, it is the citrus harvest that can be truly overwhelming.  We have 3 orange and 3 lemon trees as well as a mandarin, grapefruit and lime.  The lemons are the least prolific,  I manage to use the limes as they are ready, we eat the mandarins but the grapefruit and oranges are simply too many to manage.

So, we juice them and freeze the juice in 2 litre ice-cream tubs for use throughout the year.  I had a citrus juicer attachment for my food processor which has worked admirably for a number of years.  However, last year it became obvious that it was failing.  On closer examination, I discovered that several of the plastic cogs which drive the mechanism had broken.  As the season went on a few more broke until the attachment was pretty well useless.

Over the past 6 months or so we have researched and discussed our options as it is clear that we need to have some sort of electric citrus juicer.  I contemplated buying a replacement attachment for the food processor but it did not appear identical to the original and there was the small issue that it would only last a few years before ending up in the same state as the existing one.

We finally decided to bite the bullet and buy a commercial-grade citrus juicer from Ceado (an Italian brand).  We picked it up last week and I have now re-arranged my appliance cupboard to make space for it.

Here it is – bright, shiny and ready to use.

With the lid opened you can see the reamer cone and the press which holds the fruit in place. 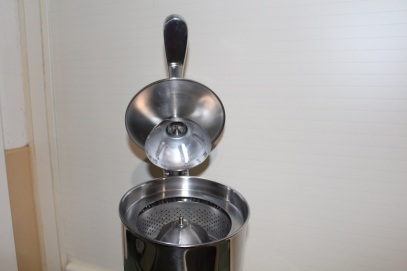 We have been picking limes and a few lemons in the past couple of weeks, however, the purchase is very timely as the grapefruit are ripening quickly and we will be picking them by the bucketful within the next few weeks.

I know that the juicer will get a real workout and I look forward to sharing the results with you.