A few days ago I posted on my Facebook page that I had cleaned a window.  Yes, one window but it was the large window above the kitchen sink.  One of my Facebook friends (thanks, Helen) commented that she had chosen to undertake some ‘Projects’ during the current self-isolation regime that many of us are currently undertaking.  She noted that projects have no time-frame and do not include regular day-to-day housework.

Yesterday was a very productive day here with a couple of projects completed as well as washing, ironing and some general housework.

I removed everything from the cupboard under the sink and wiped it out with a damp cloth.  I did not declutter anything as that had been done long ago and everything that remains is functional and used.

Replaced and ready to go.

Next was the cutlery drawer.  One of the great mysteries of life is how grubby a cutlery drawer can become when the only thing that goes in there is clean cutlery. 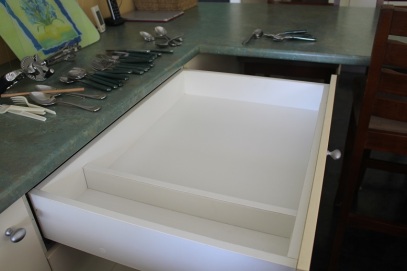 The plastic divider was washed and dried before replacing it. 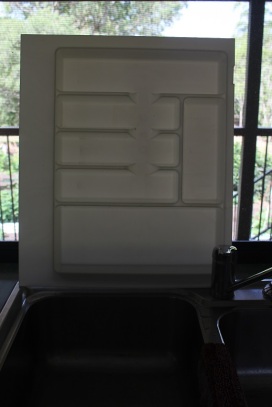 Completed – until next time. 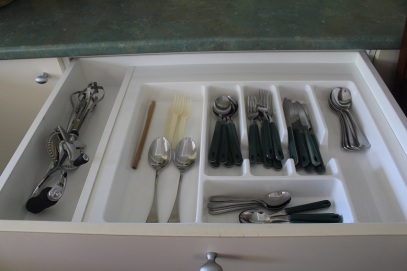 Today was a completely different story.  There were no projects tackled but I did make and receive numerous phone calls.  Some were planning, others were social calls to extended family and yet another was finalising the rescheduling of a trip to Uluru which we had been unable to undertake due to the current restrictions.  I did manage to fit in a bit of sewing, too.

While I do have a basic daily routine and some projects (large and small) in mind, my achievements vary enormously from day to day.