On the weekend I did a bit of organising in the cupboard opposite the office/library.  The catalyst was a Christmas gift – a set of decorated peg magnets.  The are 7 which are labelled for each day of the week as well as some extras.

I decided not to clutter up the door of the refrigerator with them.  Additionally, I felt that they would not be strong enough to withstand the breeze which can be quite strong.

Instead, I opted to mount them inside one of the doors of this cupboard.  First, I had to create a surface suitable for the magnets. 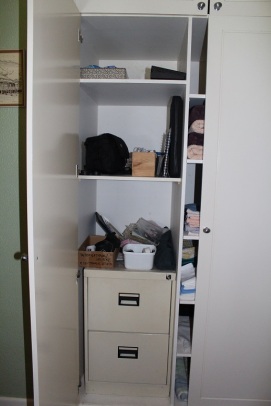 We called in to Bunnings and bought a flat metal bar which GMan cut in half and I mounted them on the door.  The pegs were placed at intervals and it looked great. 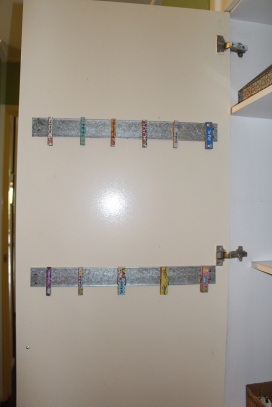 Perfect!!  Or so I thought until I shut the door.  I did not realise but if you take a closer look at the first photograph you will see that the vertical divider in this cupboard is not centred.  The door should sit flush against it but the metal bar prevented that.

So, it was back to the drawing board.  I removed my handiwork, trimmed a small amount off each bar, re-drilled the holes at one end and tried again.  This time I placed them almost flush with the hinged side of the door rather than centering the bar.  The final job was to fill the holes from the original screws.  These are yet to be sanded and touched up with paint.  That may be a job for the coming weekend.

Here is the second version of my handiwork. 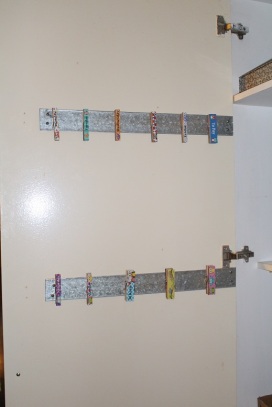 I am not a great fan of diaries but I do love a list so I have started fairly simply with some small notes for the coming days.  My goal is to write down all of the little things I need to do or remember and each day I can refer to them. 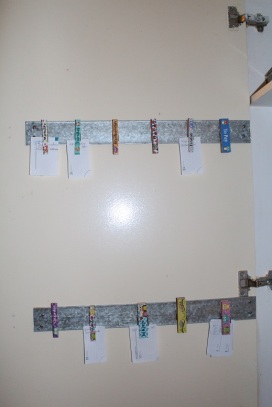 The rest of the cupboard needs some work as it is the mostly the repository for the many photos accumulated over the years which have yet to be sorted, culled and scanned.  That is a a future project.  However, tonight I did tidy one file of the filing cabinet.  It was several old work diaries which I have discarded.  I ripped all of the pages out and bagged them up to take to work tomorrow and they will go in the shredding bin.  It is a small step, but definitely one in the right direction when it comes to removing unwanted stuff from your home.