Last weekend we did some more demolition work on the old chicken coop.  We have been fairly careful in how we went about it because it was our goal to salvage most of the materials for use in future projects.  There is now only one piece of chain wire to remove and then the posts.

The Colorbond sheeting from the roof and walls will come in handy for some of the remaining raised garden beds that we are planning to construct.  The posts have been earmarked for use in building the perimeter fence of the vegetable garden.  That was the reason that we fenced the new chicken run before the vegetable garden as the posts for the run were taller so had to be purchased.

The woodshed which is in the foreground of the photo will be retained and some minor modifications made to it. 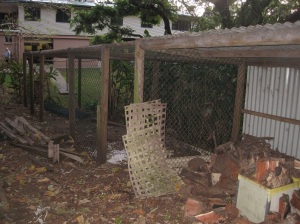 I will also be making some changes to how the wood is stored.  Although it cannot be seen in this photo, I had wood stacked quite high against the side wall.  I use the past tense of ‘had’ as recently there was a tremendous crash during the night and we have now discovered that my carefully stacked wood has collapsed and is now a disorganised jumble on the ground.  I suspect that some of the local wildlife was instrumental in this event.

As always, there is always another project lurking in the background, even if it is only in our minds at this stage.  Once the structure is completely removed this will open up the possibility of having at least one large limb lopped from one of the jacaranda trees.  There is also a very large boulder which has dislodged from higher up the mountain and is resting against part of the old fence at the top of the block.  We may remove the fencing to allow the rock to roll to the bottom of the garden (another ‘meteorite feature?) before repairing the fence.

Then there are the possibilities of what to do with the area where the chicken run was but I will save that discussion for another day.