It is now 4 days since we arrived back in Australia from our trip to the United States and I feel as though I am back into my routine.

I went back to work on Monday but yesterday was my day off so I caught up on the washing, packed the suitcases away and re-made the guest bed.

While I was emptying the cane waste paper basket in the guest room I noticed that the top edge was broken.  It is not really noticeable  because there is a plastic bag liner but I decided it would be better if I repaired it.

The cane binding had broken and the overlapping ends were sticking out. 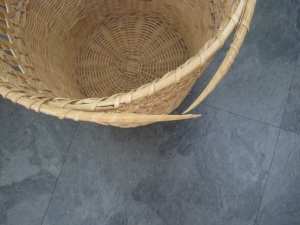 I used some white kitchen string and a large curved needle which had been in some sewing notions that were handed down to me some time ago.  I had never used the needle before but it was prefect for this job.

I tied the string in place at one end to anchor it and then held the ends in place while I wound the string around the damaged section and tied it at the other end.

It is not superbly pretty but the repair returns the baskets to its original shape and makes it easy to fit and replace the plastic bag liner. 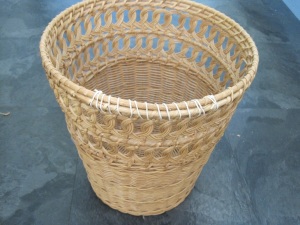 Do you take the time to make simple household repairs?  Do you keep a ball of string or do you see it as useless?

3 thoughts on “Back on Track”