We have recently replaced the protective felt feet on the legs of our kitchen chairs.  There are four high chairs which fit around our large return bench/meals area.

This project was undertaken two chairs at a time so for several weeks there have only been two chairs in the kitchen at any given time.  I realised how much less cluttered the area felt with only two chairs.  Since there is only GMan and I here most of the time, there is really no necessity to have four chairs.

The next question was, where could we store the other two chairs so that they would stay clean and be easily accessible when we had additional guests?  We found that the wardrobe in the guest room would be perfect but the space was currently occupied.  My off-season (summer) clothes were hanging on the rail and the floor was filled with about 100 magazines which are some of my retirement reading material as well as 5 large photo albums.

I set about working out how I could re-arrange things.

The clothes were moved to the empty hanging space in the third bedroom which is used primarily as my sewing room. 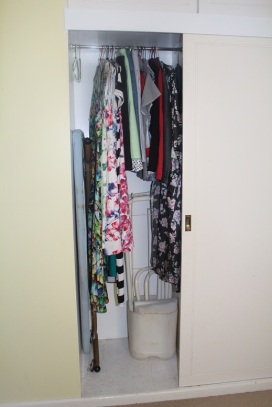 The photo albums provided the impetus to continue working on sorting and culling my photos – both digital and hard copy.  You can read more about that in my post from yesterday.  They will live in the library/study until they are no longer required. 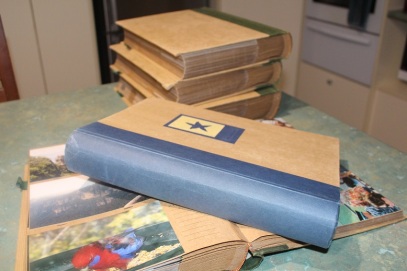 The magazines have been relocated to the drawers of the dressing table in the guest room.  I intend to make a start on reading them and expect that once I have finished reading them I will pass them on to someone else who may be interested in them. 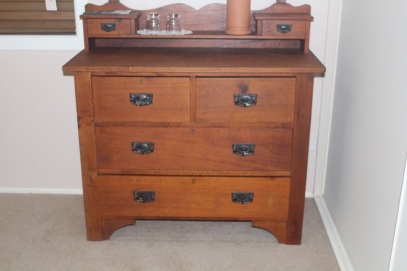 The chairs are now in the wardrobe but easy to retrieve when we need them.

I am pleased with the final result and as an added bonus I have been spurred into doing some more work on the photos as well as making a start on reading my large collection of Australian Geographic magazines.