Tonight I want to share a small gadget that we have had for a couple of years.  I don’t even know what you call it.

This small device plugs into a standard power point and then you can plug any appliance or powerboard into it.  It comes with a remote control which you can use to turn the power on and off at the switch without actually having to manually reach the switch.  We have two of these.  One is in the lounge room and has a powerboard plugged into it.  We have the television, DVD player and hard drive plugged in so that with a single press of the remote control everything is turned off at the power point.  It is completely turned off – not on standby.  Did you know that any appliance where there is an illuminated light glowing is only on standby and is continuing to draw power even when it is not in use?

The other device was in the office where we had the computer and associated peripherals plugged into a powerboard. Both devices are programmed to the one remote control.

We realised recently that we had not been utilising the remote control to turn these devices off as the computer has some serious issues when you turn it off and try to turn it back on again.  The problem may be terminal but we have solved it for the time being by leaving it turned on at the power point.  So we removed the remote control device so that we could continue to turn the television off when not in use.  The question then arose as to where we could use the spare device.  We routinely turn all of the appliances off when not in use so it seems superfluous.

Last weekend when we cleaned out the top of the cupboard in the office I found this powerboard but did not have a use for it so put it downstairs in the workshop.

This morning I worked out a way that I could put both of these items to good use.  I have a long sewing table in the spare room, however, the power point is under the table which necessitates me clambering under the table every time I want to plug in the sewing machine or iron.

So, I plugged the gadget in and then the powerboard into it. 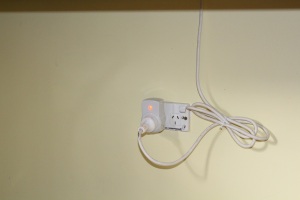 The powerboard sits on the tables where it is an easy matter to plug in the sewing machine, iron or anything else.

The individual power outlets on the board have their own switches so even if the main switch is turned on due to the remote control the individual outlets can remain turned off unless they are being used.

I am so glad that I came up with this solution as it is infinitely easier than crawling under the table to turn the power on and off.

4 thoughts on “A Gadget”