Tonight I want to share a small gadget that we have had for a couple of years.  I don’t even know what you call it. 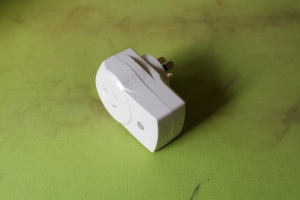 This small device plugs into a standard power point and then you can plug any appliance or powerboard into it.  It comes with a remote control which you can use to turn the power on and off at the switch without actually having to manually reach the switch.  We have two of these.  One is in the lounge room and has a powerboard plugged into it.  We have the television, DVD player and hard drive plugged in so that with a single press of the remote control everything is turned off at the power point.  It is completely turned off – not on standby.  Did you know that any appliance where there is an illuminated light glowing is only on standby and is continuing to draw power even when it is not in use?

The other device was in the office where we had the computer and associated peripherals plugged into a powerboard. Both devices are programmed to the one remote control.

We realised recently that we had not been utilising the remote control to turn these devices off as the computer has some serious issues when you turn it off and try to turn it back on again.  The problem may be terminal but we have solved it for the time being by leaving it turned on at the power point.  So we removed the remote control device so that we could continue to turn the television off when not in use.  The question then arose as to where we could use the spare device.  We routinely turn all of the appliances off when not in use so it seems superfluous.

Last weekend when we cleaned out the top of the cupboard in the office I found this powerboard but did not have a use for it so put it downstairs in the workshop. 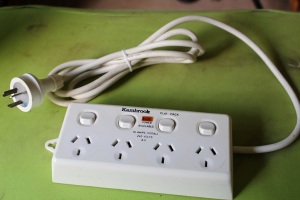 This morning I worked out a way that I could put both of these items to good use.  I have a long sewing table in the spare room, however, the power point is under the table which necessitates me clambering under the table every time I want to plug in the sewing machine or iron.

So, I plugged the gadget in and then the powerboard into it.

The powerboard sits on the tables where it is an easy matter to plug in the sewing machine, iron or anything else. 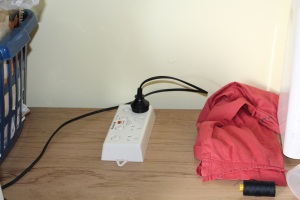 The individual power outlets on the board have their own switches so even if the main switch is turned on due to the remote control the individual outlets can remain turned off unless they are being used.

I am so glad that I came up with this solution as it is infinitely easier than crawling under the table to turn the power on and off.

While the nature of some tasks require a specific tool or space to complete the job, many things do not.

The first thing that comes to mind are the plethora of single-task appliances which seem to take up residence in many kitchens.  You know the ones – waffle makers, ice-cream makers, popcorn makers, juicers, breadmakers and so on.  I admit to having a breadmaker – The Duke makes all of our bread and has done for many years, although he is playing with the idea of artisan-style bread baked in the oven and successfully made a loaf the other day.  We also have a juicer which could be used more.

However, today I want to take the concept of multipurpose away from appliances.  When we had our kitchen re-modelled a few years ago we created a large amount of bench space, including this breakfast bar.

We use this space for eating meals, serving food and general food preparation so it does not always look like this.  Once I have finished using the bench, it is cleared and we try not to use it as a ‘dumping ground’.

By having a clean, clear bench I am able to use it for other purposes.

I can pull the chairs back out of the way and I have a cutting table and workbench for when I am sewing.  It is the perfect height and totally stable.  I am also able to access it from almost any direction.  My sewing machine is in the closest bedroom (a few steps along the hallway) but this is the perfect solution for me.

So, which comes first minimalism or multipurposing?  If I had more stuff the bench would probably not be clear to use.  If I could not use the bench would I acquire a suitable table and contribute to more stuff?

This is a winning solution whichever way I look at it.

I feel as though I have had the ‘Pause’ button on as everything has been on hold while the bathroom was being done.  Now I can see the things that I want to do.  These include: 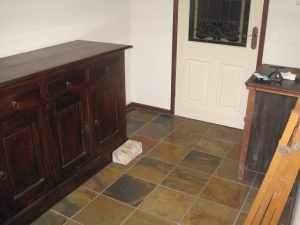 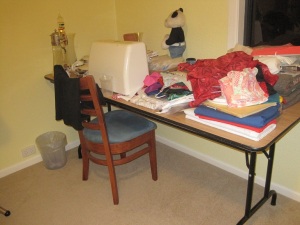 Mention of the gift bags reminds me that I did not do an update post for Lazy Brownie Day in February (25th).  I hope to have lots to post for March and get back on track to have a planned, organised Christmas.

Yesterday I picked up some crochet cotton that a friend bought for me in a sale.  I am going to use this to knit some dishcloths.  There are lots of patterns available but I think I will start with the one that Rhonda has in her book, ‘Down to Earth’. 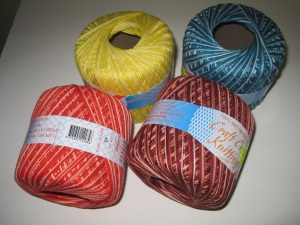 I am also pleased to report that almost everything that I listed on Freecycle under the generic heading of ‘Handyman Materials’ has been collected.  I love the fact that someone is going to be able to use these things and it has freed up some space in the workshop.

I am busy at work this week (working off-site for the next 3 days) so it will be the weekend before I make much progress.  Tonight I have finished folding the washing that dried on the indoor airer over the past few days and now it is time to catch up on some ironing.