One of the biggest threats to successful gardening in this area are scrub turkeys.  For those readers who are unfamiliar with these pesky birds you can read more about them here.  One of their favourite pastimes is digging up and eating sweet potatoes so I have resorted to placing a large panel of pool fencing over the top of the raised bed in which I am trying to grow the sweet potatoes.

However, some sweet potato runners had obviously escaped from one of the compost heaps and manged to grow in amongst the raspberry canes.  Even better, they had remained undetected by the scrub turkeys.

When GMan was doing some tidying up near the raspberry canes yesterday he noticed some errant foliage and discovered these beauties ready to be harvested. 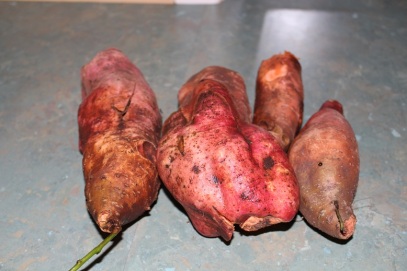 2kg of sweet potato that we did not know existed! I think I will need to re-arrange my menu plan and incorporate these into some upcoming meals.