After a break of almost 3 months, I finally made it back to the garden today.  I have really done nothing since before we went to the UK at the beginning of November and since we arrived home in early December my intentions have been thwarted by hot weather, Christmas preparations, another holiday and numerous social events as well as being busy at work.

However, I woke up at 5am today and decided to bite the bullet before the sun became  too intense.  2.5 hours later I came in after having made a start on some weeding in the vegetable garden enclosure.  In all honesty, you could barely see where I had been but I felt better knowing that at least I had made a start.

We went shopping this morning and as well as food we managed to buy more than a dozen plants.  Later this afternoon GMan and I weeded the area in front of the house.  This runs the full length of the house and is planted with numerous hibiscus shrubs and covered with mulch.  Where the hibiscus are well established and close together there was very little weed, however, there are still some substantial gaps and some unwelcome plants had become quite well established.  Of course, the area is almost overrun with cherry tomato plants but I am prepared to accept them as they are food.

The next job was to tackle the raised garden bed containing the sweet potatoes.  When we planted them some months ago we placed a panel of old pool fencing over the bed to keep the scrub turkeys away from it as they just dig up the potatoes and eat them and completely destroy the plants.  We had intended to remove it once the plants became established but that did not happen.  The plants had grown right through the fencing and far, far away…………  It was not easy to remove and in the process we discovered that there was a good crop waiting to be harvested.

Here is our haul. 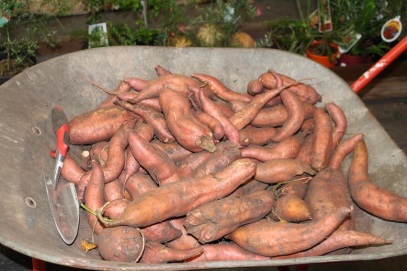 In a recent post I published a list of some of the projects we intend to tackle this year.  One of them was to create a garden outside the vegie garden.  My intention is to create a mostly native garden with a seat in the midst of it. At the moment it is just grass but that is about to change.  Today we took the first step and bought a selection of plants which will form the basis of this garden. 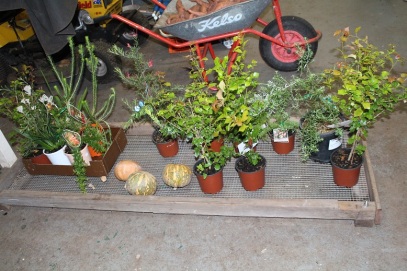 This is the result of our garden shopping so I am quite keen to see my planned garden come to fruition.  Not of all the plants we bought will be for that area but we have plans for all of them.

Hopefully, I will have some more photos to share before too long.

We are planning to make an early start again tomorrow as it is really the best option during the summer months here.

One thought on “In the Garden”