One of my longer term projects is to use up the many and varied fabric pieces I have acquired from multiple sources.

When I was tidying up a few weeks ago I found various pieces of denim offcuts. Once I collected them all together I realised that there was a significant pile. Many were pieces that had been cut off when shortening new jeans. Others were salvaged from garments that were no longer wearable.

Using an existing apron for a template I made a pattern then a patchwork denim apron for myself. The neck strap, binding and ties were all salvaged or remnants.

After posting this photo on my Facebook page I was approached by a friend who asked if I was selling them. Well, not exactly, but I did agree to make her one. This time I even included pockets. These were salvaged from a pair of GMan’s old gardening jeans that had been patched so many times that he had recently declared that they were only fit for the rubbish. That was the case for most of them but the back pockets were still in good condition.

I used flat felled seams to replicate the seams normally seen on jeans. This also meant that there are no raw edges on the reverse of the apron.

My pile of denim offcuts is now much reduced, although I do still have enough for the occasional mending task.

Following on from my first attempt at patchwork, I decided to try my hand at some bunting.  My thoughts on making this is exactly the same as patchwork – it should be about using up the scraps that you have – not buying a bundle of mix’n’match fabrics for a ‘perfect’ look.

Miss O and Izz are here tonight and they were keen to help.  They both gave their opinions on the fabrics we chose to use and Miss O was able to turn the triangles after 2 sides had been stitched.  I completed the turning with the aid of a knitting needle to fashion the point of the triangle.  She also helped to arrange the sequence so that there was a good combination of patterns. 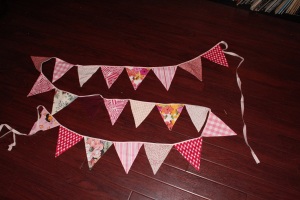 This is what we ended up with – a couple of metres of decorative bunting in a selection of pink tonings.  There are large and small florals, checks, stripes and abstract prints.  Some of the fabric is very lightweight and other is quite heavy.  All of it has been salvaged from the offcuts of other projects – some new and some used.

It is a quick and fun project which uses a relatively small amount of fabric and produces an almost immediate result.  A perfect school holiday activity if you have small helpers!