‘Rearranging the deck chairs on the Titanic’ is a phrase which is often used to describe a futile action in the face of impending catastrophe.

Far from being a futile exercise, I have been rearranging furniture recently.  As we continue to gradually reduce our possessions we have less need for storage.  Bookshelves/display units are a perfect example.

A few years ago we had 2 of these shelves filled with books.  One was sold a couple of years ago and the other is going to a new home today. 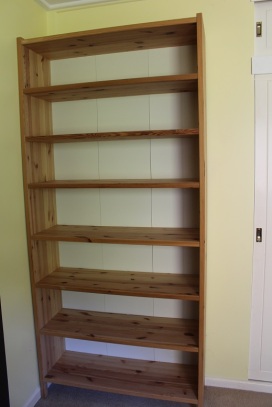 When we seriously downsized the number of books we had a couple of years ago, this shelving unit became useful storage for sewing fabrics and projects.

The sewing is now housed in this large IKEA cube unit which was previously a display unit/bookshelf in the lounge room. 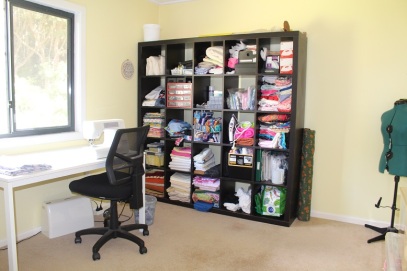 Here is a closer look at the sewing table which is ‘new’ to me. 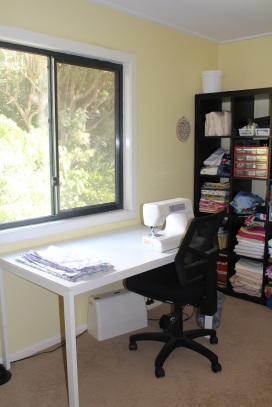 This white laminate desk came from my daughter as it does not fit in her new accommodation.  I was very happy to have it to replace the folding trestle table which I have used as a sewing table for many years.  This one is more compact and suits the decor of the room but, most importantly, it is solid and does not shudder when I am using the sewing machine at fast speeds.

Additionally, there were 2 smaller IKEA cube units in the lounge room originally which have since been moved around.  One of them spent some time in the sewing room and the other as a stand for the television before we gave one to our daughter and the other became the bookshelf in the library.

The other smaller cube unit has recently come back from our daughter as she no longer needs it.  So, back to the lounge room it went.

I am pleased that nothing has been wasted and many pieces have been able to be repurposed by thinking laterally whilst reducing our overall possessions.

I am not a great fan of re-purposing as I feel that some people use it as an excuse for not trying to reduce the stuff (particularly packaging) that they acquire.  However, sometimes it is impossible to to gain items.  This was the case recently when my birthday gift from my work colleagues came in 3 matching cardboard boxes.  They looked too good to simply put into the recycling so I put them in the cupboard with the vague notion that I may be able to reuse them as gift boxes as they had no visible brand name on them.

Today I needed to pack up my sewing as I was going to a production day for our Boomerang Bag group.  I keep all of the sewing threads in a small plastic basket but it was not really easily transportable as it does not have a lid.  Additionally, the basket was overflowing, thanks to several reels of thread that had been given to me recently.

Thank goodness for the boxes. 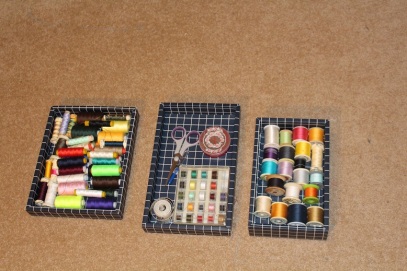 The threads fitted easily in 2 of the boxes and I put the box of bobbins as well as scissors, pins etc in the third box.

The slide-on covers mean that things could not fall out during transport.

I have decided to keep the threads in the 2 boxes on the shelves in my sewing room.  The other notions are back in their regular places and the third box is available to transport them on future occasions.

The small white basket at the far left of the shelf is identical to the empty one which previously held the threads.  I will probably rearrange things of some of the shelves and use it for storing other items.

The plastic baskets have stood the test of time as I originally bought them for dividers in the drawers of our bathroom vanity unit.  I subsequently replaced them with some straight-sided containers which were a better fit for that space. 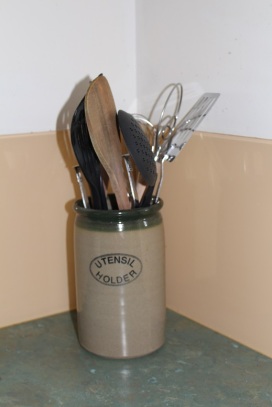